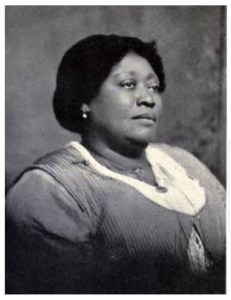 Sister Rosa Lula Barnes is by no means your average socialite…… Sis Barnes is remembered as a leading businesswoman and societal engineer from #Savannah, #Georgia !
Barnes was born on August 22, 1868, in #Huntsville, Alabama. She struggled to get a good education but was able to enter #HuntsvilleNormal and #IndustrialInstitute where she received her “formal schooling”. After completing her education, she married and soon began her life as a housewife. Not to take a backseat to her husband though….Barnes always had a business mindset and quickly recognized the need for a local grocery store for the black community. She opened a store on Price Street and soon became known as a shrewd businesswoman. She ran her grocery store as good as any man for ten years, closing her doors in 1893 to pursue other ventures. The confines of her community just wasn’t “enough” for Sis Barnes so she entered the world of fraternalism. She joined the #CourtofCalanthe which is the female auxiliary of the #KnightsofPythias. Soon after she was promoted to the esteemed post of #GrandWorthyCouncellor.

While operating her businesses Barnes made several real estate investments. She bought a nice house on East Henry street as well as 12 rental properties. She also bought 5 large vacant lots in the historic city just to hold until the value appreciated. Her business acumen was on par with the best to do it of that time period, male or female, black or white!
She also owned a good bit of stock and was a Director in the #WageEarnersBank of Savannah. She owned a portion of the #StandardLifeInsuranceCompany, the #AfroAmericanCompany, as well as stock in the #UnionDevelopmentCompany of Savannah.
As far as titles she was the #SupremeWorthyInspector for the National Court of Calanthe, #DistrictMostNobleGovernor of the #HouseholdofRuth in #Georgia and #GrandWorthySuperior ofthe #GrandHouseholdofRuth in #America and Jurisdiction . She was also #PastGrandMatron of the #EasternStars in Georgia….. A black female business owner in the South !!!! Be proud yall…… #salute #GUOOF #guoofof #blackhistory #americanhistory #flt #threelinks #District18