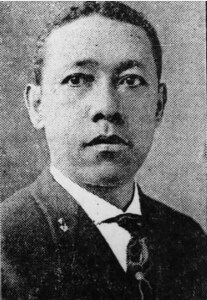 Our Brother Hon. Henry Lincoln Johnson was an American attorney and politician from the state of Georgia. He is best remembered as one of the most prominent  African-American Republicans of the first two decades of the 20th century !!!! Known to family and friends as “Linc,” Johnson was born on July 27, 1870 in Augusta to former slaves Martha Ann and Peter Johnson.
Johnson attended Atlanta University, graduated in 1888. He then attended the University of Michigan from which he obtained a law degree in 1892. After passing the Georgia bar exam he opened a law practice in Atlanta, eventually becoming the attorney for the #AtlantaLifeInsuranceCo.
Johnson married fellow Clark Atlanta University graduate Georgia Douglas in 1903. She achieved literary fame as a poet associated with the Harlem Renaissance. #googleit
During the first years of the 20th century Johnson emerged as a leading boss in Georgia Republican  politics. Johnson’s role was that of the chief dispenser of  “political patronage” to black Republicans. Johnson was appointed by President Taft as Registrar of Deeds for the District-of-Columbia in 1910, regarded as the premier political job historically earmarked for African-Americans.The family moved from Atlanta to #WashDC in support of Linc Johnson’s new position.Johnson seems to have taken to his new post in Washington, DC, and worked behind the scenes for the election of Democrat Woodrow Wilson in 1912 managing to remain in his position until the Wilson administration purged African-Americans from federally appointed positions in 1913. The Republican Party of Georgia split into two rival factions: a group of African-American-dominated regulars headed by Johnson, commonly known as the “black and tans”, and an insurgency of European-Americans commonly known as the “lily whites”. Johnson managed to retain control of the party apparatus in the Presidential election year of 1916 and again in 1920, controlling the Georgia delegation to the Republican National Convention in those years and thus retaining control over patronage appointments.In 1920, Johnson was among those black leaders of the Republican Party to meet in Chicago.

Johnson’s appointment was taken up by the United States Senate for ratification in November 1921.  There Georgia Democratic Senator Tom Watson, a political foe, led a fight against Johnson’s confirmation in committee and on the floor of the Senate.  Watson charged that the appointment of Johnson was “personally obnoxious to him” for having said in an interview with an African American newspaper from Baltimore that Johnson would “rather be in hell without Tom Watson than to be in heaven with him.”  Watson also charged that Johnson had engaged in financial shenanigans in Atlanta which made him unsuitable for government trust.

Meeting in executive session it was reported that Georgia’s other Senator, Democrat Nathaniel Edwin Harris had joined Watson in pronouncing Johnson “personally obnoxious to him,” code words invoking an unwritten rule in the Senate granting de facto veto power to Senators over appointments relating to their states.  The vote against Johnson which followed proved to be virtually unanimous, with only one Senator registering his support for Johnson over the objections of the Georgians.

After his 1921 confirmation defeat in the Senate, Johnson returned to legal practice in Washington, DC; his place in national politics was thereafter limited. One of Johnson’s most famous cases came in 1922, when he was called to defend a young black man charged with sexual assault of a white girl below the age of consent.  These extremely serious charges carried a potential penalty of 30 years in prison or execution, not to mention the possibility of extrajudicial lynching.

Following expert cross-examination in the case, Johnson delivered what was called by one observer one of the “most eloquent and forceful” closing arguments ever heard in a District of Columbia court.   The jury failed to agree in the case after six hours of deliberation, with seven jurors voting for acquittal; the foreman later commented that the defendant owed his life to Johnson’s summation.

Despite his removal from Georgia politics, Johnson was not entirely forgotten in the corridors of power. In September 1923 Johnson was one of a handful of black political leaders invited to Washington, DC for private consultations with President Calvin Coolidgeon issues of concern to the African-American community.

Shortly after his death, Johnson was eulogized with an editorial in the Pittsburgh Courier, an important black newspaper, which opined:

To mention the name of Linc Johnson is to speak of politics. He grew up seeking his place at the political table. He sought it unceasingly, without rest or compromise. Politics was the only food he sought with diligence. Of his own personal welfare, he cared little. Of his own personal comforts, he cared, perhaps, not quite enough. … He thought of politics, the power of politics, and nothing so absorbed him as politics.

There is a place left vacant by his passing. He filled it as he saw his duty, both to himself and to his group. … He was a type unto himself, admired, loved, and hated, depending upon how well he was understood; but through it all, he remained the one and only Henry Lincoln Johnson…..